My breastfeeding experience – the first 6 weeks

In hospital Athena latched on (albeit painfully!) right away, and started getting the colostrum that about 4 different Midwives called 'liquid gold' (as if trying to persuade me it was a good thing, I'd already made it clear I wanted to breast feed!) and throughout the first night she either slept on my chest or fed from it! At this stage each time she latched on was pretty painful, and I distinctly remember looking away from her when I winced in case she could sense I was in pain (as if she could even focus her eyes, but I think I was delirious from lack of sleep!)

The next morning she wouldn't feed from the right boob, until Sam remembered the 'rugby ball' hold and we tried that (kind of under the arm, so she comes at the nipple from another direction) and it worked a treat! Once we came home the first midwife who visited showed us 'planting' which is basically getting her in position, nipple lined up with nose and then waiting for her to open up wide and literally shoving her onto the nipple swiftly! I was shocked at the speed at which she did it with but Athena started sucking away with hardly any pain! She also said to make sure that the babies belly is facing yours, not upwards, as it will help them swallow more easily. The aim is for your nipple to be pointing towards the roof of their mouth...

Once my milk came through properly on day four, the previously slightly cracked nipples started to heal and harden up and since then I've not had to use the nipple cream every day. Other positions we've used are lying down, for in bed night time feeds, her lying on my chest (i let her root around and find the nipple herself, and this 'tummy time' helps her strengthen her neck muscles. When you put her on Sam's chest she will work her way all the way up to his chin, which is impressive but very natural as its a babies instinct to seek food! 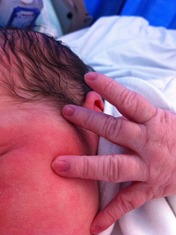 For the first two weeks I was looking for her feeding to fall into a pattern or routine, but then quickly realised that she wants food when she wants it, no routine to be had at all!! Once I embraced that, and stopped stressing inputting feed times into an app on my phone things got a lot easier! The other thing that makes it easier is having the full support of Sam, he'll get me a glass of water or cuppa if I've run out (or finished one and she's still feeding!) and if we're up having a feed in the night when he gets home from work he'll sit and massage my neck and shoulders for me, as well as telling me I'm amazing every so often, and doing a whole load of housework and cleaning! 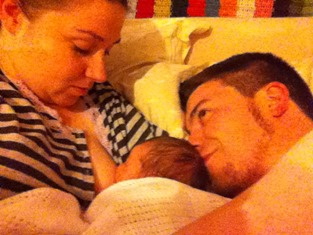 After 3 weeks I tried expressing (using a manual pump) during Athena's longer afternoon nap, and to my surprise it wasn't that tricky, though the first 2 or 3 pumps are a bit painful each time! I got about 3oz the first time, then the next morning woke up with engorged boobs as she’d slept 6 hours which meant I filled right up, so I fed her from one and got 5oz from the other! I’m now pumping during her morning nap if I'm at home and at any other time later in the day if I'm not, especially if my boobs start leaking! The main reason for starting to express was so that Sam could share feeding, and to get her used to a bottle so that I can be away from her for more than 3 hours max at a time! We plan to get her used to taking a bottle from anyone, so babysitting will be easier for people! 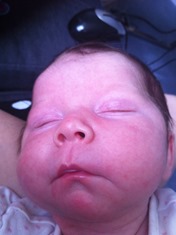 I’ve now fed her at the beach, on a bench outside the shopping centre, on a train and in a few restaurants and pubs. I just always make sure that I've got a muslin or scarf to cover things up, but so far I’ve not had anyone mention it or even look interested, yet alone offended. The worst thing is finding easy boob-access dresses, as the top-pulling-up method only works if I wear a skirt, and as I only have one that fits is a rare occurrence, and I don't wear trousers so rarely wear tops!

During the night she normally wakes up around 6am, so we feed in bed for this one with us both laying on our sides facing each other (this one works for lazy TV watching on the sofa too!) and sometimes I'll sit her upright on my lap facing me and supporting her with one arm, which works well when you need to use the other arm for something! The baby carrier I have doesn't allow access to le boob, so I've not tried feeding from a sling whilst out and about yet but perhaps in the future!